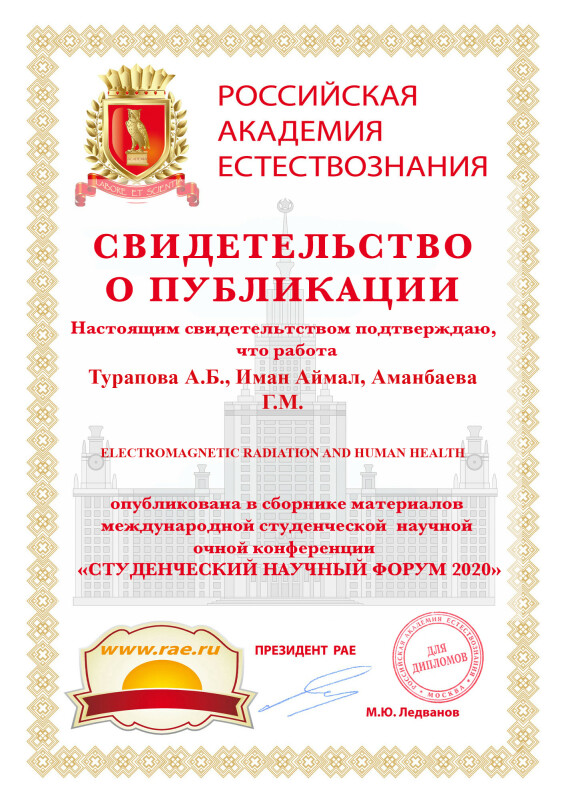 This article presents the results of a study of the effects of electromagnetic radiation from a Wi-Fi router, mobile phones and home appliances on a living organism. A survey was conducted among first-year students on the identification and effect of EMR harmfulness emitted from household gadgets.

The development of telecommunication technologies contributed to the fact that at present, almost every person is exposed to electromagnetic waves related with the mobile network [1, 2, 3].

The mode of propagation of any information through nerve fiber is electrical. The absorption of heat by nerve fiber or axon takes place on interaction with Electromagnetic waves. So there may be unwanted and undesired generation of action or rest potential or a trend towards that. A biological membrane is a super molecular system. Membranes are semi-permeable in nature. Most of the cells including nerves contain more potassium ions (K+) than sodium ions (Na+). Out side the cells the pictures is just reverse. The sequences of operation are as under:

– The electric field (E) supplies energy to the membrane.

– The membrane absorbs a part of the energy.

– The increase in temperature causes change in the ratios of Na+ and K+ ions concentration in and out side the cells.

An electromagnetic field (also EMF) can be viewed as the combination of an electric field and a magnetic field; therefore, both components are important in the analysis of exposure.

Electromagnetic radiation consists of electromagnetic waves, which are synchronized oscillations of electric and magnetic fields that propagate through a vacuum at the speed of light.

Electromagnetic waves are a form of radiation within the range from ultra high-energy cosmic rays and gamma rays with frequencies of 1018 Hz to low-energy microwave radiation of 10 GHz, or radio waves of 100 MHz. As a result, an electromagnetic field is generated. These forms of energy may affect the functioning of living organisms; however, knowledge about this problem is still insufficient.

Objective: to identify the effect of EMR on living organisms.

Materials and research methods. To study the effects of electromagnetic radiation in the human body, a social survey was conducted among first-year students of Bishkek universities (KSTU named after I. Razzakov, KSMA named after I.K. Akhunbaev, KRSU named after B.N. Yeltsin, MUK). In the course of sociological research, 190 respondents were interviewed. Of these: 120 (63 %) are Male students, 70 (37 %) are Female students. Age structure: 17-24 years old.

The research results showed. The survey results were processed (Table). The questionnaire had questions related to human health. And in connection with these issues, quantitative and qualitative analyzes of the harmfulness of EMR were obtained (1a, 1b, 2a, 2b, 3a, 3b). The number of students with health problems was once again analyzed for the duration of using electronic gadgets (1b., 2b., 3b).

Energy carried by electromagnetic radiation is absorbed into the living tissue, i.e. converted into kinetic energy of the particles of which the object is constructed. The amount of electromagnetic radiation absorbed per mass within a specified time is defined as the Specific Absorption Rate (SAR). This value is a basis for determination of the maximum allowable intensities of the electromagnetic fields energy streams to which a human body may be exposed. The allowable SAR values are specified for various parts of the body. There is also a mean SAR value defined for the whole body [4]:

The energy absorbed in the tissues of the living body may cause an increase in its temperature, especially within high frequencies fields. In normal conditions, the absorbed energy of the values SAR = 4 W/kg causes an increase in the body temperature of a healthy individual by 1 °C.

It was also proved that long-lasting telephone conversations lead to small changes in the brain temperature [5].

The research results showed. According to the results of a social survey, students who used smartphones for more than 3 hours a day have health problems i.e it can be concluded that prolonged exposure to EMR has a negative effect on all living organisms. Therefore, you should minimize the time you use electronic gadgets.

Conclusions. Electromagnetic radiofrequency waves the most obvious biological effects on living cells are due to heating. Although many young people refute the harmfulness and do not comply with the regime of using electronic gadgets, but radio frequency radiation in General poses a risk to human health, there are a number of reasons for concern about the impact on human health of cell phones themselves. These concerns exists because the antenna’s of these phones deliver much of their RF energy to small portions of the user’s head, resulting in headaches which has been found very common among high user’s of such RF emitting phones as our research proved beyond doubt.