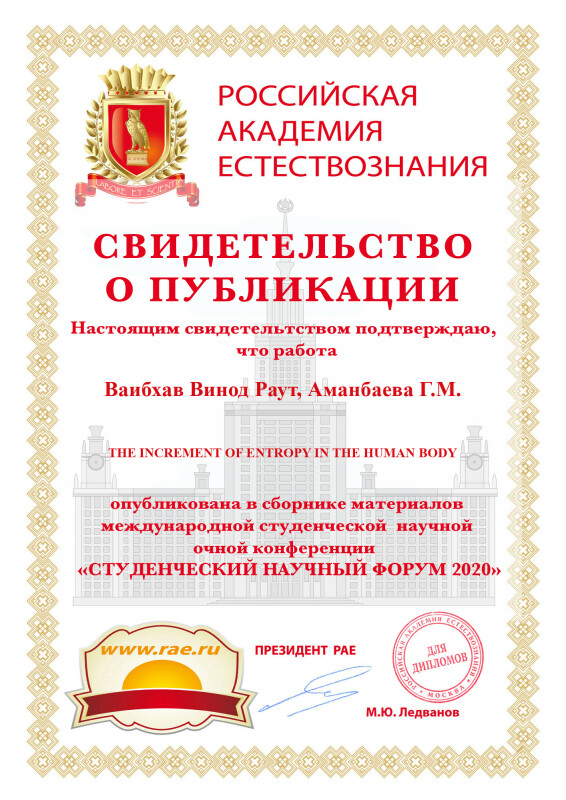 THE INCREMENT OF ENTROPY IN THE HUMAN BODY

In the light of results obtained during the last years, it appears that some of the tools of nonlinear dynamics, first developed for the physical sciences are well suited for studies of biological systems. We believe that, considering the level of order or complexity of the anatomical apparatus by measuring a physical quantity, which is the entropy, we can evaluate the health status or vice versa fragility of a biological system. The second law of Thermodynamics that is the entropy can be use to determine the different stages of the most dangerous diseases. Many laws proved that the pathological condition of patients can be analyzed based on thermodynamic equations.

Open system is characterized by fluxes of energy and matter order can arised as long as the entropy of surrounding and system increases [1]. The Carnot efficiency limits the rate at which entropy is produced by the heat flux in to the system as human body is open system [2, 3]. For the last 150 years there has been speculation that universal extremal principle determine what happen in nature [4–6] most prominent being maximum entropy production principle by Paltridge, Ziegler [7, 8]. Maximum entropy production explain different convection like Rayleigh Benard convection flow regimes in plasma physics the laminar turbulent flow with respect to blood vessel. Entropy deals with the randomness of system that is human body [9, 10-12].

Here S is the entropy change. Q is the heat received by the body through various sources like sun, food, mechanical and T is the temperature of body.

is positive with the second Law of Thermodynamics.

The human body is governed by various macroscopic variable molecules.

This total internal energy is obtained from surrounding sources. In this only the kinetic energy can be converted to do work because the potential energy is stored in the body in the form of fats. There are various ways in which the internal entropy of the human body increases above normal which can be due to vigorous exercises heat produced in our body or the best explained by the shivering of body through the Sliding Filament Theory which tells that the two filaments that are actins and myosins present in our muscles starts sliding over each other hence producing heat. But when this sliding is due to abnormal condition due to some damage to the Central Nervous System or due to some defect in the sensory or motor neurons.

Entropy change through blood pressure. Let us consider the human physiological system characterized by blood pressure (BP), heart rate(HR), skin temperature(ST). For this work done is given by

The partial derivative is approximated to form a modified Maxwell relation that is used in the present study to compute the physiological entropy change ΔS resulting from change in blood pressure (BP), heart rate (HR) and skin temperature (ΔTskin) [10].

In this equation the skin temperature (ΔTskin) in the denominator acts as a temperature at the boundary of the thermodynamics system and provides the physiological reflection of emotional response to the surrounding. The deviation from the relaxed state may be positive or negative depending on the external factors.

Many result have proved the estimation of entropy generation during human lifespan. The main idea proposed by most of these investigation is that entropy can be related to aging through irreversible cell damage entropic aging or thermal denaturation which indicates structural changes with heat thereby affecting the normal functioning of cell. The studies also suggest that there is a limit of entropy generation that can be correlated to life span [13].

In principle life is supported by the energy provided by the nutrients. If we account for the entropy generated during the metabolism of said nutrients we potentially obtain a good approximation of the entropy generated by the process of supporting life. What is needed is an estimate of entropy production during metabolism including the effect of metabolic efficiency and the amount of energy required by an average human over lifespan.

Human disease corresponds to a non-stationary state with increased entropy reproduction. According to the mathematical theory of catastrophes, in acute diseases, it is necessary to move from a «bad» stable state to a «good» one. In this case, large doses of medications are used. In the phase of fading exacerbation of diseases, the role of small influences, such as acupuncture and homeopathic remedies, which have a positive effect, increases.

Entropy has its various uses in the field of medicine. It determines various factors related to the patient health: